The other big event in the Paisley Burns Club calendar is the Summer Outing when the Club sets off to visit a site, or sites, related to Burns’s life and work. There is a scholarly element in the arrangements, made by the president, but it is also a leisurely day with ample time for interaction and relaxation. It ends with a dinner, in a hotel appropriate to the place of the visit, and members who are prevented by work or other commitments from being with the group for the whole day often attend.

Our outing in June 2007, orchestrated by President Drew Livingstone, included a visit to Bolton churchyard. The members and guests are pictured around the family grave of Gilbert Burns. There follows an account of this visit printed in the local newspaper. 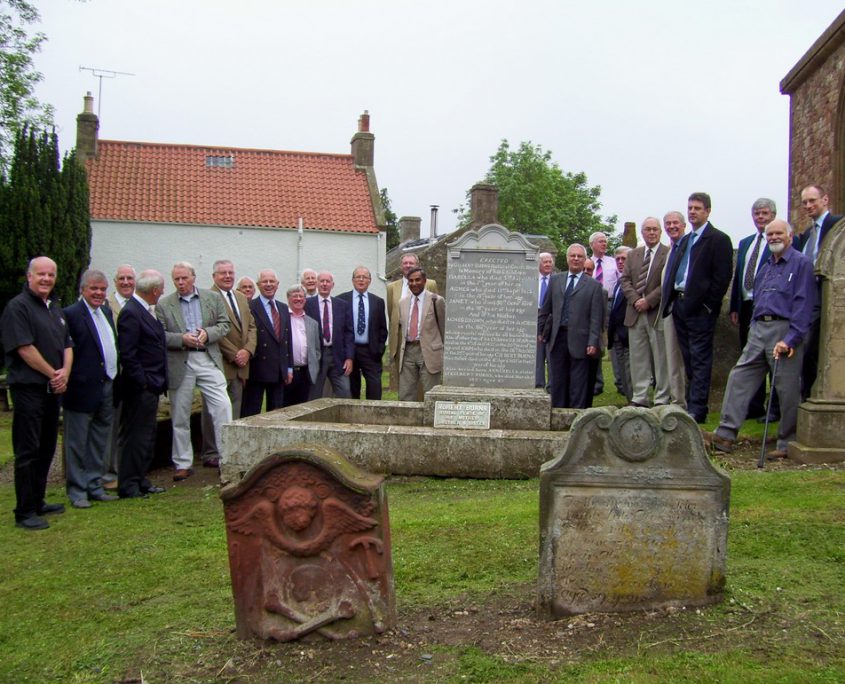 Paisley Burns Club celebrates funding for the Restoration of the Burns' Family grave in Bolton Kirkyard.

Paisley Burns Club recently visited parts of East Lothian with significant Burns connections and, while there, visited Bolton Kirk Yard to celebrate the success of a funding venture by Grants Braes Burns Club. The Burn’s family grave, which is situated at Bolton Church and is set in the centre of this view surrounded by members of Paisley Burns Club, is to be tastefully regenerated by the funding secured earlier this month.
The final resting place of the Bard’s Mother, Brother and many of the Burns family will take on a more significant presence in Scottish culture and heritage through the work of the Grants Braes Burns Club in Haddington.
This is part of the Homecoming Project, to celebrate the 250th Anniversary of Scotland’s most famous son. The first part of this Project is now secure thanks to the promised injection of cash.
With full details of the award due to be announced shortly, the grave of the Mother of Robert Burns will now be preserved for generations to come and restored to its original form. This recent achievement complements the sterling work of Tranent 25, Thorntree Mystic, and Prestonpans Airts Burns Clubs more than seventy years ago.
The words of William Baxter, whose inscriptions are visible today at the memorials at Grants Braes, are testimony to the to depth of respect felt by all admirers of the Bard, for his mother and family.

‘Drink of the pure crystals and not only be ye succoured but also refreshed in the mind’
To the Mortal and Immortal Memory of
Agnes Brown
1732 – 1820
In noble tribute to the mother
Who not only gave a son to Scotland – but to the whole world
And whose doctrines he preached to humanity
That we might learn.